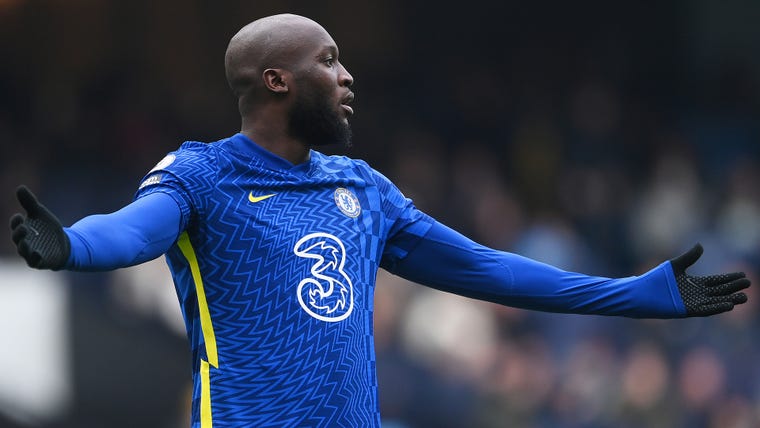 Thomas Tuchel has admitted that he was left frustrated by Romelu Lukaku's performance for Chelsea against Manchester City, in Saturday's Premier League defeat at the Etihad Stadium.

Kevin De Bruyne's second-half strike was enough to seal a 1-0 victory for Pep Guardiola's hosts, who finished the match with a 13-point lead over the Blues - their nearest rivals - at the summit.

Unlike his countryman, Lukaku was frequently unable to effect as much control in a frequently muted showing from the visitors - and speaking after the final whistle, Tuchel acknowledged that he had been left unhappy with his efforts.

"We had eight or nine offensive transitions, but had zero touches in the box," the German stated in his post-match comments. "That was a big problem today, the performance of our front players. A lack of position, timing and composure. We lost too many balls too easily.

"Romelu Lukaku sometimes needs to [deliver] the service. He is included in this, he had many ball losses in very promising circumstances. He had a huge chance.

"Of course we want to serve him, but he is part of the team, and the performance up front, we can do much better. "

The German expounded upon his side's overall performance - where they failed to land a shot on target in the first half - and noted that he felt like they deserved a point at least, while adding that he acknowledges City may now be too far to catch.

"I thought we deserved a draw, we defended very well," he added. "We did not allow big chances. We were not under so much pressure. A draw would be a fair result but we don’t have it."

"We will never give up, but if City keep winning every game, nobody can catch them."