Serge Gnabry signs a new contract at Bayern Munich with new deal until 2026. he finally ends speculation over his future

Serge Gnabry has signed a new contract at Bayern Munich, his club have confirmed His deal, which will now run until 2026, finally puts an end to speculation surrounding his future - after several clubs expressed their interest in the winger.

As revealed by Sportsmail, Chelsea were weighing up a move with 'tentative' enquiries made, while Arsenal, Manchester United and Man City were linked. Serge Gnabry has a remarkable record for Germany, with 20 goals in 34 international games.

However, Gnabry has now decided to stay in Bavaria after penning fresh terms. His extension was announced this afternoon during a team presentation.

On signing the contract, the former Arsenal man told Bayern: 'I thought a lot about what I wanted as a player for the next few years - and came to the conclusion: I want to stay at Bayern, win everything here again and experience something - above all the Champions League again.﻿ 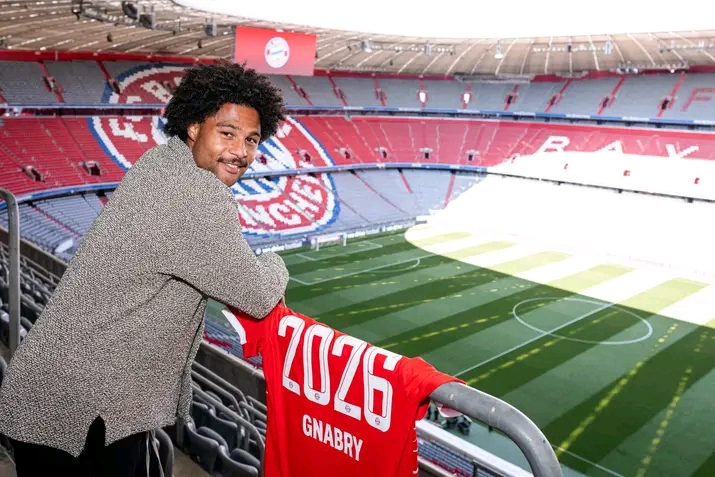 Celebrating titles, but this time with our fans. It's something special because I can play here with my friends at the highest level. I certainly wouldn't experience that at any other club. I want to experience great moments here again - and not somewhere else. The hunger for big titles doesn't go away.Gnabry played his first professional football with Arsenal and was brought into the Gunners academy as a teenager in 2013, before Arsene Wenger appeared to lose faith in him and sent him on loan to West Brom in February 2016.

He was then shipped to Werder Bremen in 2018 before making the switch to the Bavarian side a year later, where he has gone on to become a world-class performer.

Winning 12 major trophies with Bayern including four Bundesliga titles, a Champions League and the Club World Cup, Gnabry has enjoyed a stellar career back in Germany.

He scored 14 goals and laid on six assists in 34 Bundesliga games last season for Julian Nagelsmann's side – his best goal return in the league.