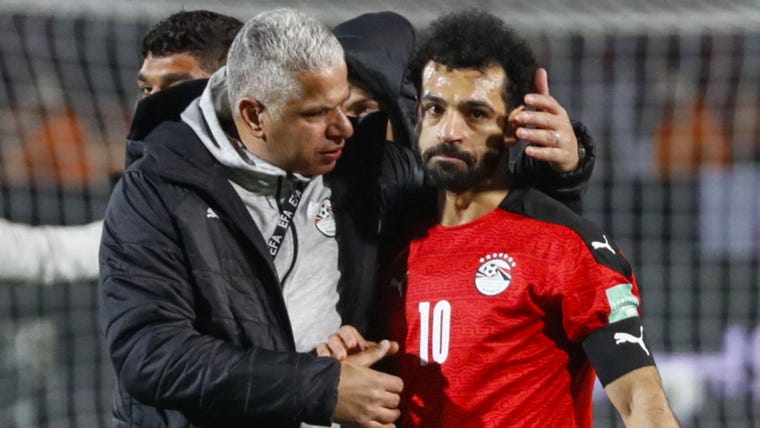 Salah missed a penalty in Tuesday's shoot-out as his nation missed out on a place in Qatar, having drawn 1-1 on aggregate over the two legs of the qualifier.

Now, at the age of 29, he seems to be having doubts over whether to return to duty for the Pharoahs.

Salah was caught on video in the Egypt dressing room speaking in frank terms with his team-mates.

“I told the players before the second match that I am proud to play with them and they are among the best I have played with," he explained.

“I played for some time with the previous generation, with Wael Gomaa and Mohamed Abu Trika, then Abdullah Al-Saeed and his generation, but I'm happy with the current generation.

“I am proud to play with you and it was an honour for me, and what happened cannot be interfered with by anyone because for the second time it is a penalty shootout (after the AFCON final).

There is not much I can say but it has been an honour to play with you, whether I will be in the national team after that or not."Egyptian Minister of Sports, Ashraf Sobhi, however, interrupted him, saying: "You will be there."

A new mural for Salah

While Salah's international future may be up in the air, he remains a hero both for Egypt and in Liverpool, where a new mural was unveiled for the star.

The striker has been at Anfield since 2017, netting 153 goals in 239 games in all competitions and leading the Reds to glory in both the Champions League and Premier League.