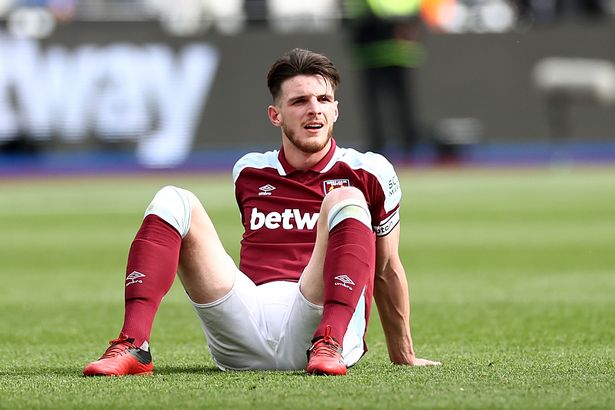 West Ham midfielder Declan Rice has been handed a two-game ban by UEFA, after the Manchester United and Chelsea target launched an angry rant at officials following the conclusion of his side's Europa League exit against Eintracht Frankfurt last month.

The England international was seen launching a furious tirade at referee Jesus Gil Manzano in a video taken after the Hammers' fairytale run through Europe came to a close in the last four, in an ill-tempered encounter that also saw team-mate Aaron Cresswell and manager David Moyes sent off.

The latter said the club would take no punishment against their star man, but now UEFA have handed down a double-match suspension to Rice that rules him out of the club's next two continental fixtures.

What did Rice said to the referee?

In the wake of the game, which West Ham lost 1-0 to seal their European exit, Rice was seen raging at referee Manzano after a performance by the latter deemed to be substandard by the irate playmaker.

"Ref, ref, it's so poor, all night, it's so bad," the midfielder was seen to shout. "How can you be that bad, honestly? You've probably been paid."

Frankfurt went on to win the Europa League later that month, with victory over Scottish outfit Rangers.

Would Rice's ban carry over to a new club?

Despite assurances from Moyes that their star man will not go anywhere, Rice's exploits last season - on the back of a sublime Euro 2020 campaign that helped steer England to the final - the midfielder remains a key target for both Manchester United and Chelsea.

Both clubs would have to fork out a likely eye-watering sum to bring the Three Lions man on board, and the likelihood of Rice being able to force an exit is also likely moot, given that his contract runs through until 2024.

But even if he was to make a move, his UEFA ban would remain intact, meaning he would miss the first two games of European competition at either club next season, just as he will otherwise miss West Ham's Europa Conference League playoffs in August if he stays.