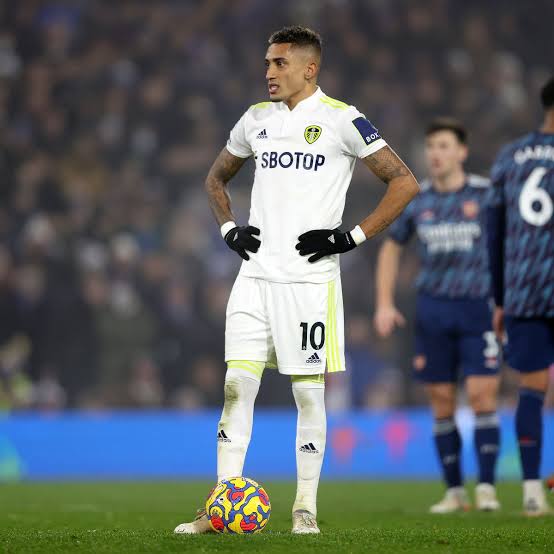 Leeds United has made it crystal clear to the Spanish side, Barcelona that they won't accept a bid less than €55million for the Leeds' star. Having stayed at Leeds since 2020, Barcelona FC are eager in casting their net in the Leeds' river in target for the 25 years Brazilian forward. While Leeds United remained strong on their ground, majority of the Barca fans have also expressed their own opinion suppressing the idea of buying the Leeds forward at such a high bid. As gathered from the random opinion poll of the bidding Spanish side on twitter with the tag, "Should we pay this much?", 19% agreed to the stipulated bid price, 65% voted for a massive "NO" while 16% are unsure.

However, the Leeds seems not to go any further below their stipulated €55m fixed price. Still maintaining their ground, Leeds United communicated to Barcelona that they do not want the fee to be paid in a lot of installments. This could be a hard nut to crack for the Spanish side, thus narrowing the chances of closing this bid on the long run.

Raphinha has Barcelona as priority since February, but the deal is still not close to be completed between the two clubs. Could this blur his dreams of playing in Barcelona?.

Leeds have no intention to accept less than €55m - not payable in many installments/years. It is up to Barça, while other clubs are now joining the race too. Hence, Barça is likely to be knocked off the race if any of the interested clubs agrees to the stipulated fee by the Leeds side.

Noting that the Brazilian forward and Leeds' star ended the 2021-22 season as Leeds' highest goalscorer having scored 11 goals. He scored one of the most important goals for the club on the last day of the season by scoring from the penalty spot after being fouled by the Brentford goalie, David Raya thereby, confirming Leeds' Premier League status.