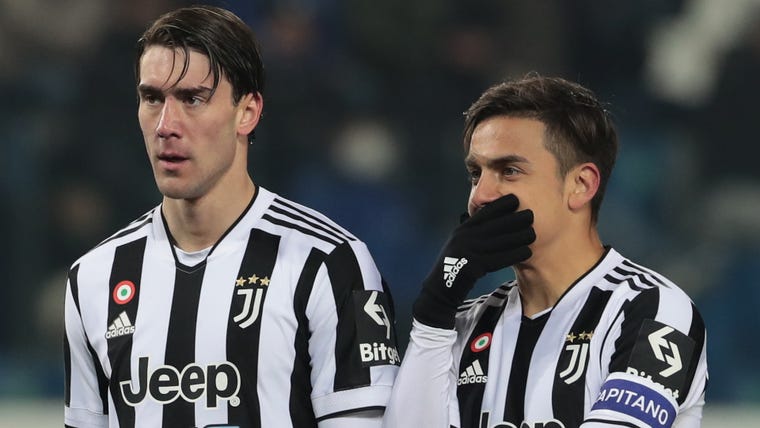 The Argentina international had been in talks with the Serie A side over a new deal, but will instead depart the club for free at the end of the season.

The January signing of Vlahovic from Fiorentina has changed the club's plans for the coming years, Arrivabene said, resulting in the decision to let Dybala's contract expire.

He told reporters: "It was a friendly, clear and respectful meeting. We had a very sincere approach.

"With the arrival of Vlahovic, Paulo was no longer at the centre of the project and we made this decision.

"The arrival of Dusan changed the position. The technical structure of the team and the Juventus project has undergone some changes.

"Part of these changes concern Dybala's contract, which has not been renewed."

Juventus previously offered Dybala a contract in October and were set to reduce the salary they were willing to pay him even further before deciding not to renew his deal.

"It would not have been easy for Juventus to make a lower offer," he said.

"Paulo spent seven years of his career with us, an offer of that kind would not have shown the respect that there is towards him. No one has ever questioned Dybala's technical prowess.

"The parameters in October were different. There were considerations to be made on attendance, on the length of the contract and others of an economic nature.

"It is important to underline that the management does not take decisions against Juventus, but in favor of the club."

How has Dybala performed for Juventus?

Dybala, 28, joined Juventus from Palermo in 2015 and has won five Serie A titles and the Coppa Italia four times with the club.

He has made 283 appearances overall, scoring 113 times.

This season, he has played 29 times in all competitions and scored 13 goals.