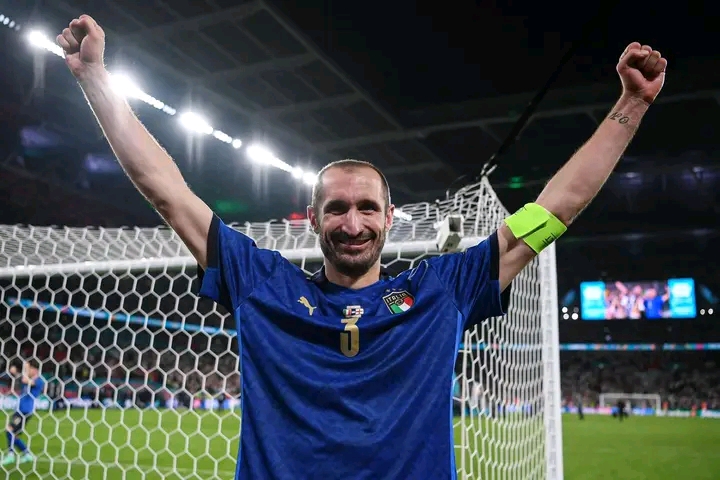 Giorgio chiellini is an Italian professional footballer who plays as a centre-back and captains Serie A club Juventus. He will join Los Angeles FC on 1 July 2022. Considered one of the best defenders of his generation, Chiellini is known for his strength, aggressiveness and man-marking, as well as his ability to play in either a three or four-man defence. He has also played as a left-back earlier in his career.At club level, Chiellini began his career with Livorno in 2000, also later playing for Fiorentina, before moving to Juventus in 2005. With Juventus, he has won a record-nine consecutive Serie A titles from 2012 to 2020, as well as five Coppa Italia titles and five Supercoppa Italiana titles, having also played two UEFA Champions League finals in 2015 and 2017. Chiellini has been named in the Serie A Team of the Year five times: in 2012–13, 2014–15, 2015–16, 2017–18 and 2018–19 and has been awarded the Serie A Defender of the Year also three times: in 2008, 2009 and 2010.

Having made his international debut for Italy in 2004, Chiellini was selected in the nation's squads for the 2004 Summer Olympics, winning a bronze medal, as well as for four UEFA European Championships, two FIFA World Cups and two FIFA Confederations Cups, helping the Azzurri to win UEFA Euro 2020, reach the final of UEFA Euro 2012, and achieve a third-place finish at the 2013 FIFA Confederations Cup. He retired from international football in 2022 with 117 caps, making him Italy's joint fourth-highest appearance holder. On 20 October 2020, Chiellini made his 71st Champions League appearance with Juventus in the team's opening European game of the season, a 2–0 away win over Dynamo Kyiv, overtaking Alessio Tacchinardi as the club's third–most capped player of all time in the competition; however, he suffered an injury during the first half and was replaced by Merih Demiral.

On 2 August 2021, Chiellini renewed his contract with Juventus, signing a two-year contract extension until June 2023. However, after losing the 2022 Coppa Italia Final, Chiellini announced that he would leave Juventus at the end of the season.