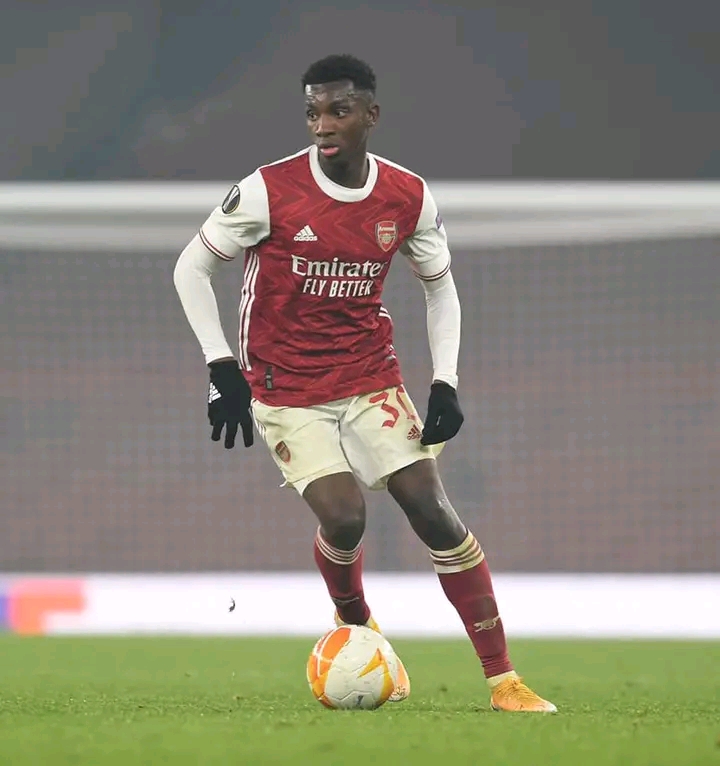 Edward Keddar Nketiah is an English professional footballer who plays as a striker for Premier League club Arsenal. Nketiah is a product of the Chelsea and Arsenal academies and played on loan at Leeds United in their victorious 2019–20 Championship season. Born in London and raised in Lewisham, Nketiah started his career with Chelsea after being scouted at the age of nine while playing for south-east London Sunday team Hillyfielders. He was released by Chelsea in 2015. He then joined the Arsenal Academy and played for the club at youth levels. During the 2016–17 season, Nketiah scored 15 goals in 16 appearances for the under-18s while also scoring 12 goals in 26 appearances for the under-23 side. After that season, Nketiah was called up by Arsène Wenger for the senior side's pre-season trip to Australia and China.

On 28 September 2017, Nketiah was called up again to the senior side, this time for Arsenal's Europa League match against BATE Borisov. He came on as an 89th-minute substitute for Joe Willock as Arsenal won 4–2. His next appearance came nearly a month later against Norwich City in the League Cup as an 85th-minute substitute. He scored after 15 seconds with his first touch to tie the match, adding another in extra time to win it for the Gunners. Nketiah was set for a loan move to German Bundesliga side FC Augsburg in January 2019 transfer window, but due to an injury to Danny Welbeck, Nketiah stayed at Arsenal. Eddie Nketiah has reportedly agreed a new long-term contract to stay at Arsenal after turning down multiple bids. The 23-year-old's Gunners contract was due to expire at the end of the month, but the striker is said to have signed a contract until the summer of 2027, which makes him part of Mikel Arteta's long-term plans.

Although, with speculation still surrounding the arrival of Gabriel Jesus from Manchester City, he may face a battle to start matches once again next season. Nketiah, however, turned down multiple bids from Bundesliga and Premier League clubs including West Ham and Crystal Palace to stay at the Emirates Stadium. Nketiah was originally expected to leave the Gunners this summer after rejecting a number of contract extensions - citing his desire to play regularly as the key factor behind his decision.

He was largely out of contention for a starting berth in the Premier League last season.The youngster's fortunes changed in April when Alexandre Lacazette was ruled out with coronavirus.