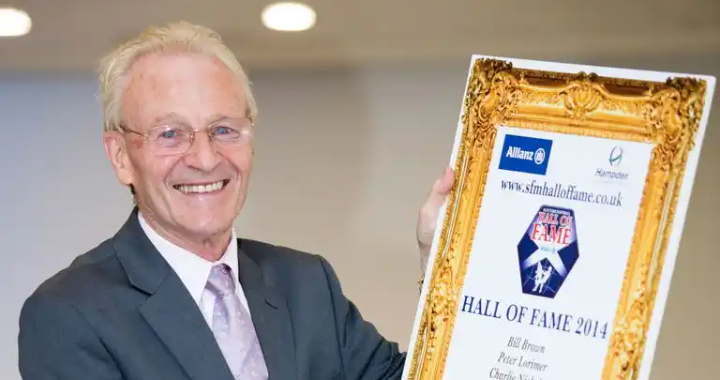 David Wilson ( 10 January 1937 – 14 June 2022) was a Scottish international footballer who played as an outside left. He was perhaps best known for his decade at Rangers in which he played an important role in the club's success of the early 1960s; he also made over 100 appearances for Dundee United. He was also selected 22 times for the Scotland national team, and was later a manager, primarily at Dumbarton where he had ended his playing career.

As a teenager he was rejected by local Junior club Cambuslang Rangers for being too small, and instead began his career at Baillieston. He soon came to the attention of Rangers who signed him in 1956.

Wilson made his first-team debut on 2 January 1957 just prior to his 20th birthday, was selected for European matches against AS Saint-Étienne and AC Milan and played sufficient games for a League winner's medal in 1959, but it was not until the 1959–60 season that he became a regular in the side. He also began to score frequently, with 22 goals from 50 appearances in all competitions having only scored 8 in 51 in his first three seasons combined. Rangers reached the semi-finals of the European Cup and won the Scottish Cup.

The following season was even more successful, as Rangers won the Scottish Football League and the Scottish League Cup. Wilson played every minute of the campaign's 56 matches and scored over 20 goals, forming part of what would become known as one of the greatest Rangers forward lines, along with Ralph Brand, Jimmy Millar and Willie Henderson, supported by Jim Baxter. However, there was disappointment in the European Cup Winners' Cup as Fiorentina overcame Rangers in the final.

1961–62 ended with Scottish Cup and League Cup victories, and Wilson achieved a club record which has never been equalled since when he scored six times against Falkirk (a 7–1 win) 17 March 1962 (however Jimmy Smith had achieved the feat twice in the 1930s). Four days later on 21 March he scored a hat-trick for the Scottish League in a 4–3 victory against the English League at Villa Park. Around that time he declined an approach from Everton for what would have been a British record transfer fee. The next year brought a League and Cup double and Wilson hit over 30 goals, including four in one match against Partick and one in the replayed cup final against Celtic. Wilson departed from Ibrox aged 30, having scored a total of 159 goals in 382 matches in all competitions. He was naturally right-footed, and became adept at dribbling with either foot, crossing from the byline on the left, and cutting inside to shoot powerfully with his stronger foot or connect with through balls – tactics which brought an impressive goal tally particularly for a player who was not a dedicated striker (he is ranked seventh of all post-WWII scorers for Rangers). He has since been inducted to the Rangers Hall of Fame.

In August 1967 Wilson transferred to Dundee United along with teammates Jimmy Millar and Wilson Wood, with Orjan Persson moving in the opposite direction. He spent four seasons at Tannadice, playing over 150 matches (129 in Division One) as the club consistently finished in the top half of the league. His time with the club coincided with that of future Rangers boss Walter Smith, whose father had worked with Wilson whilst he was apprenticed to a local steelworks in the village of Westburn, and who would later be signed by Wilson's backroom team in his time as an assistant manager. In 2017 Wilson became a member of United's Hall of Fame.

Wilson moved to Dumbarton in January 1972, helped the club win promotion at the end of that season. He retired as a player at the end of the following campaign in 1973, aged 36, after helping Dumbarton maintain their status in the top division; he thereafter became a coach at the club.