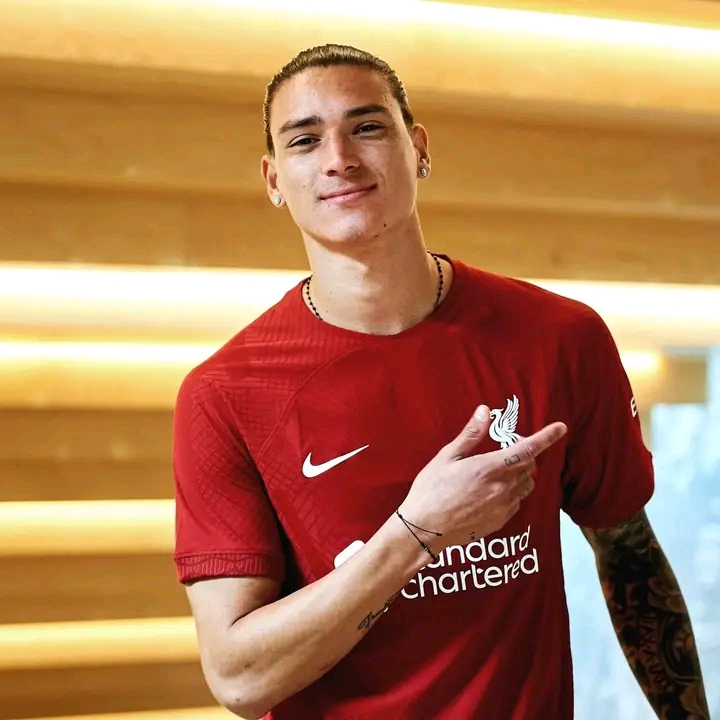 Darwin Gabriel Núñez Ribeiro is a Uruguayan professional footballer who plays as a forward for Benfica and the Uruguay national team. He will officially join Premier League club Liverpool on July 1st, 2022.

On 4 September 2020, Núñez signed a five-year contract with Portuguese club Benfica, who paid a club record fee of €24 million for the player. This was also Almeria's and the Segunda División's biggest transfer, with the club also receiving 20% of a future transfer. Eleven days later, he made his debut for the club in a 2–1 loss against PAOK for the 2020–21 UEFA Champions League third qualifying round replacing Pedrinho in the 65th minute of the game.

he returned to action against Lech Poznań in the Europa League group stage, scoring Benfica's second goal in a 4–0 home victory. He scored six league goals and provided ten assists – second-best in the league – helping Benfica to a third-place finish and qualification for the Champions League third qualifying round. In May 2021, Núñez underwent surgery due to an injury on his right knee, forcing him to miss Benfica's first months of the new season. He made his return from injury on 21 August, replacing Everton in the 72nd minute, in a 2–0 away victory over Gil Vicente, being booked in the process. On 29 September, he scored his first two UEFA Champions League goals in a 3–0 home victory over Barcelona, and was named man of the match.

On 27 November, he scored his first hat-trick in the league as his team finished the first half at B-SAD 7–0 up, though the game was abandoned early in the second half due to insufficient players on the COVID-affected host team; on 12 December he added another treble against Famalicão in a 4–1 away win, becoming the seventh player in the league to score back-to-back hat-tricks. Three days later, he scored two goals in a 3–0 home win over Sporting da Covilhã to send his team into the semi-finals of the 2021–22 Taça da Liga, though, while he was away on international duty for Uruguay, Benfica were defeated 2–1 by crosstown rivals Sporting CP in the final.

On 27 February, Núñez scored his 20th league goal for Benfica in as many matches, in a 3–0 home victory against Vitória de Guimarães. On 15 March, in the second leg of Champions League round-of-16, he scored the only goal of an away win over Ajax, securing a 3–2 aggregate win in the process. On 9 April, he scored his third hat-trick of the season in a 3–1 victory against B-SAD, bringing his total goal count for the season to 31 goals. He scored two goals against Liverpool in the 2021–22 UEFA Champions League quarter-finals: one in the first leg and the other in the second leg, while his team were eliminated 6–4 on aggregate. His sixth goal of the campaign made him Benfica's all-time top scorer in modern Champions League history, surpassing Nuno Gomes' record of five goals set in the 1998–99 season.

On 17 April, he scored a goal and provided an assist to help defeat the hosts Sporting 2–0 in the Derby de Lisboa, being named man of the match. He finished the season with 26 goals in 28 league games, being awarded the Bola de Prata award as top scorer of the Primeira Liga.

On 13 June 2022, Benfica reached an agreement with Premier League team Liverpool for the transfer of Núñez for a €75 million fee plus €25 million in add-ons. The following day, the club confirmed the deal, for £64 million, with add-ons potentially increasing the fee to £85 million at a later date.