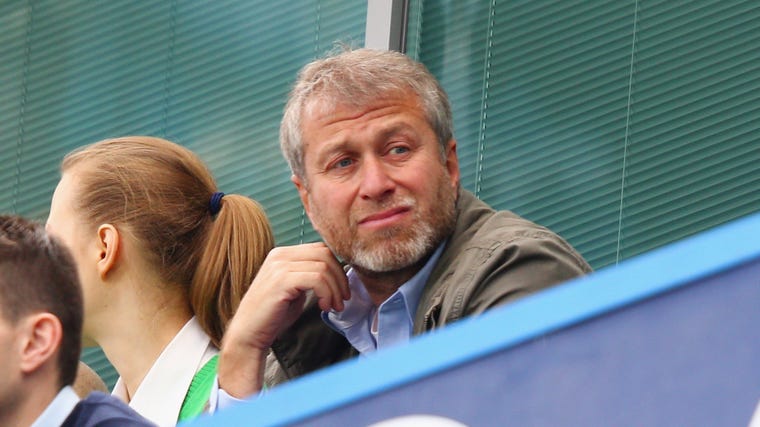 The 55-year-old billionaire has since recovered from the alleged attack, which has been attributed to hard-line Russian agents who wanted to disrupt the peace process in the original report by the Wall Street Journal.

The symptoms were said to include "red eyes, constant and painful tearing, and peeling skin on their faces and hands." The Blues owner is said to have been travelling between Moscow, Ukraine and Turkey since he put Chelsea up for sale on March 2.

Why is Abramovich involved in the war situation?

People close to Abramovich have claimed that he has been involved in peace talks since the war broke out in late February.

Indeed, he has been spotted close to the border between Belarus and Ukraine, with his private jets constantly moving between Russia, Belarus and Turkey.

After being sanctioned by the UK Government on March 10, the Blues owner was described as a "pro-Kremlin oligarch" who had has a "close relationship" with Vladimir Putin for decades and has obtained "financial benefit" and "preferential treatment" from that relationship.

The European Union (EU) then followed suit and sanctioned Abramovich which caused complications for Chelsea in the day-to-day running of the club.

Does any of this impact the sale of Chelsea?

The sale of Chelsea should exist broadly outside of Abramovich's influence for now.

New York investment bank Raine Group is managing the sale of the club but the ultimate decision on a new owner rests with Chelsea's board. On that board are several close associates to Abramovich, including Marina Granovskaia, Bruce Buck and Eugene Tenenbaum.

The UK Government has limited Chelsea by placing a special operating licence on the club in a bid to ensure no money goes to Abramovich who is currently sanctioned.

However, in recent days, there has been talk that Chelsea are seeking to boost the price of the club to record-breaking levels for a sports team.

It raises the prospect that the proceeds of the sale could ultimately go to Abramovich after any sanctions are eventually lifted.

The current record sale is £2.5 billion, which was spent on the NBA's Brooklyn Nets by Joseph Tsai.

Many close to the process, believe that £2.5bn is the minimum the Stamford Bridge club could go for with preferred bidders being encouraged to raise their offers.