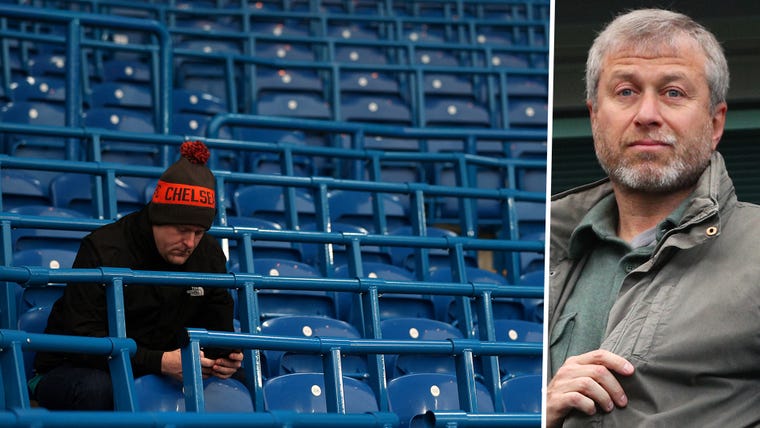 The Blues have seen their owner, who had been looking to sell the club, become the latest Russian businessman to have his assets frozen

With Roman Abramovich becoming the latest Russian businessman to see his assets in the UK frozen, Chelsea are now unable to sell tickets to fans that do not have season cards and will be unable to sign players in the summer transfer window.

The Premier League outfit are also being forced to close their club shop, as merchandise sales are put on hold, and cannot tie any player currently on their books to a new contract – with the likes of Antonio Rudiger, Andreas Christensen and Cesar Azpilicueta heading towards free agency.

Abramovich has been stung by sanctions from the UK government while in the process of trying to sell Chelsea.

Can Chelsea sell tickets to fans?

One of the biggest issues for Chelsea supporters during an unfortunate sequence of events for them as a sporting institution is the fact that many are now set to be shut out of Stamford Bridge.

With Abramovich’s assets being frozen, he is being prevented from generating any capital in England.

That means that any fan without a season card cannot purchase a general admission ticket for the club’s upcoming fixtures.

Chelsea are due to face relegation-threatened Norwich at Carrow Road on Thursday, while their next home game will be against Newcastle on Sunday.

West Ham, Wolves and Watford are all due to visit west London before the end of the season, while away games will be taken in against the likes of Leeds, Everton and Manchester United – with the Blues also still in contention for FA Cup and Champions League honours.

They will not be shifting any official merchandise during those fixtures, with bans also now in place when it comes to off-field sales.

With Abramovich still at the helm, Chelsea also face the threat of being unable to add to their squad when another recruitment window opens while also bidding farewell to those that are running down their current deals.

Why has action been taken?

The UK government is coming down hard on those that boast ties to Vladimir Putin’s regime in the wake of Russia’s invasion of neighbouring Ukraine.

Chelsea, as a “significant cultural asset”, are being granted special licence to continue playing, but their owner will be denied the opportunity to make any profits.

Culture Secretary Nadine Dorries said on Twitter: “Our priority is to hold those who have enabled the Putin regime to account.

“Today's sanctions obviously have a direct impact on Chelsea and its fans. We have been working hard to ensure the club & the national game are not unnecessarily harmed by these important sanctions.

“To ensure the club can continue to compete and operate we are issuing a special licence that will allow fixtures to be fulfilled, staff to be paid and existing ticket holders to attend matches while, crucially, depriving Abramovich of benefiting from his ownership of the club.