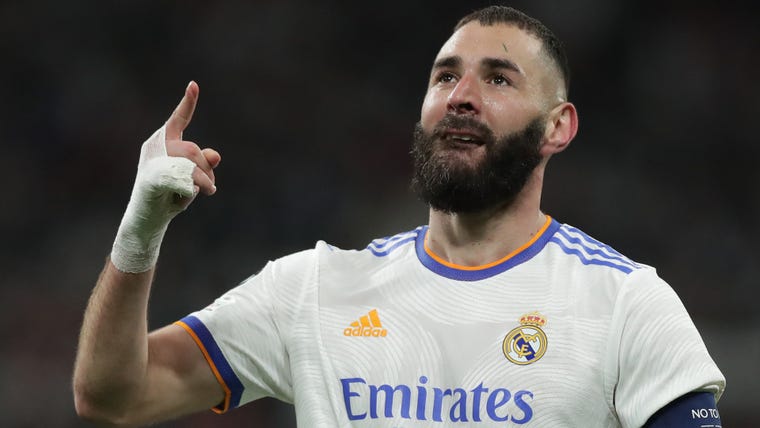 The French forward scored a stunning Champions League hat-trick against Paris Saint-Germain, but his first effort did spark some controversy

Karim Benzema is adamant that the first effort in he recorded when netting a stunning Champions League hat-trick against Paris Saint-Germain deserved to stand, with the Real Madrid striker adamant that he did not foul Gianluigi Donnarumma when making the Italian goalkeeper pay for dwelling on the ball.

he Blancos were in need of inspiration from somewhere at that point after seeing Kylian Mbappe double PSG’s aggregate advantage, with a French forward hauling them back into the tie before going on to seal a 3-2 overall success and a place in the quarter-finals.Questions have been asked of whether Benzema tripped Donnarumma when forcing him into a hurried clearance that fell to the feet of Vinicius Junior, but the Real frontman insists he did nothing wrong as an Italian shot-stopper gifted La Liga giants a lifeline.

Benzema told Canal+ when asked about an incident on the hour mark that got his hat-trick heroics rolling: “The first goal? No, nothing. No foul. Just pressing.

“He should have cleared it. He waits and waits and loses the ball in the end.”

The prolific 34-year-old added: “My greatest match in the Champions League? It was only a last-16 game, but personally it is something exceptional.

“We must not give up in the Champions League and we showed that we are a great club.”

Forces Donnarumma into a mistake then gets in the right position to finish!#UCL pic.twitter.com/9CpWZHOpU9

BENZEMA PULLS ONE BACK. 👀

Gianluigi Donnarumma won't want to watch that one back. 😳 pic.twitter.com/yibMd8qDRy

What was PSG’s take on Benzema's first goal?

While Benzema is convinced that he merely forced Donnarumma into a mistake, those in the PSG camp were less than impressed with the performance of match officials at Santiago Bernabeu.

Sporting director Leonardo was among those left fuming at the end, with the Brazilian telling Canal+ of a controversial incident that let Real back into the tie: “We dominated here and at home, and then, even if it's not an excuse, there was a foul on Donnarumma.

“It was difficult and we got lost. But this situation changed our mindset and changed Real, we had difficulties to manage after that. It was decisive. And when we are eliminated, it's complicated.