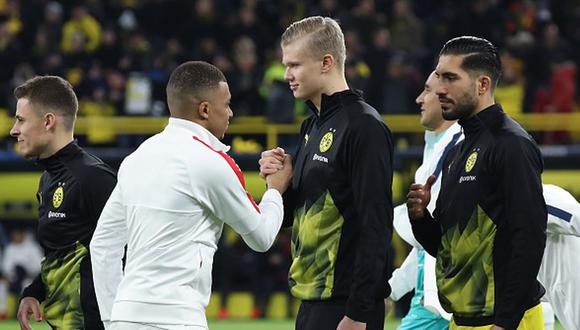 Barcelona president Joan Laporta says his side will not sign Kylian Mbappe and Erling Haaland if it means favouring either of the strikers over the rest of the team.

The Catalan side are one of the top candidates to sign the coveted Paris Saint-Germain and Borussia Dortmund strikers, with rivals Real Madrid also in the picture.

But Laporta is not willing to upset the balance of the team just to sign them, and insists he will not put the club in financial trouble to sign them.

Asked if his club has made an offer to Mbappe, Laporta told Mundo Deportivo: "Here everyone is free to launch messages and proclamations and we already know that this is part of the world of football, that the big clubs are interested in great players.

"But I'm not going to enter, and you have to allow me not to talk about players because if I do, the only thing I can do is harm the interests of our club.

"If we talk about a player and we had the intention of signing him, we would increase the price.

"Neither with this player nor with others do I want to comment on issues because it would harm the interests of the club.

"The technical secretary and sports management are working to improve our squad, which is getting better and better, we are more and more satisfied.

"I want it to be clearly understood that we prioritise the team above all else, a reinforced team in each of its lines and what we do not participate in is elevating players or looking for players who are more than the team.

"What we want to strengthen is the team we have that plays based on a genuine Barca system.

"The club thinks that this is what the football team needs, this genuine style that for me is the key to everything and is what we have to do, a team that can play this system with highly talented players."

What has Laporta said about Haaland?

Laporta was also hesitant to comment on the prospect of signing Haaland, adding: "I insist, I will not talk about specific players but I can tell you that we will not carry out any operation that puts the institution at risk.

"It has been a maxim that we have followed since we became president again, it happened to us in various circumstances and we are going to continue with this philosophy, not to put the institution at risk with operations that, not even if we were already healthy, we would.

"So, you can talk about players, about big-money operations in which Barça is not going to lose its head.

"That the fans are calm because we are not going to lose our heads for an operation of these magnitudes.

"Most of the players want to come to Barca, they like the club, the team, our philosophy, our way of working, of understanding football. And this is good, we are verifying it in many cases and daily.

"They will have to adapt to the salary levels of Barça and to an economic structure of the operation that maintains the sustainability and balance of the club."