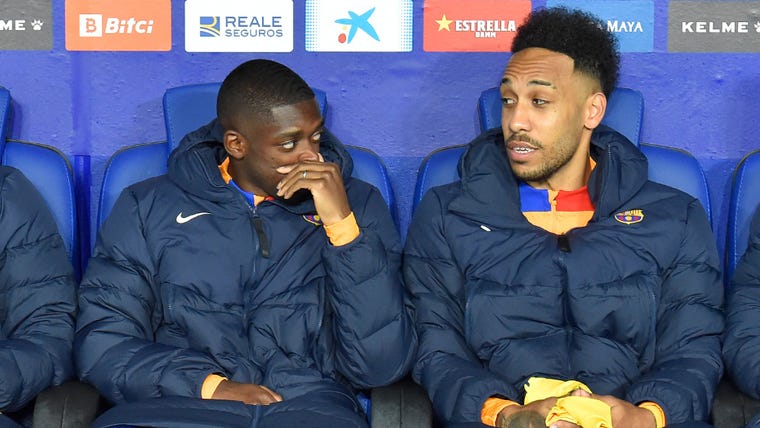 While Dembele, whose current deal runs out after the season, is expected to depart in a matter of months, Aubameyang has insisted that "everything is possible".

The Gabon attacker also called Dembele an incredible player with skills few in the world can match.

"To tell the truth, I am very happy that he is here and when I arrived I told him: 'You have to stay, bro!'" Aubameyang said to Mundo Deportivo.

"It is something very special [to play with him] because we had an incredible year in Dortmund and he is an incredible player. Ousmane is one of the best on the ball and as a striker he is incredible.

"I don't know [if he'll stay], but the only thing I can say is that everything is possible in life."

After injury kept him out of the Euros, Dembele has also suffered from health problems at Barcelona this campaign as his career continues to be plagued by missed games.

Off the pitch, he has feuded with the club over his contract situation, with the Blaugrana at one point suggesting they wouldn't let him play another game if he didn't immediately renew his deal.

Unable to leave in the January transfer window, it appeared possible Dembele would be benched the rest of the year.

However, Xavi has decided to bring him back into his squad in recent weeks and even defended him against booing from Camp Nou fans.

"I would like them to support Ousmane," Xavi said earlier this month. "I'd ask them to stop booing him."

Dembele earned a rare La Liga start this past weekend and delivered an assist in a 4-1 win over Valencia. Aubameyang scored a hat-trick in the victory.