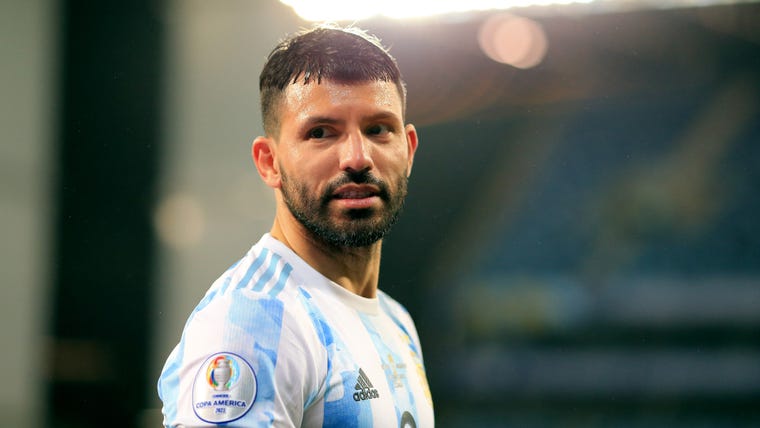 The 33-year-old, who was forced to retire in December 2021 due to a heart condition, had hinted in February that he would be a member of Lionel Scaloni’s backroom team when his fellow countrymen go in pursuit of global glory later this year.

Those plans have been shelved following talks with Scaloni and national captain Lionel Messi, with Aguero set to fill a cheerleading role instead of a tactical one.

Explaining his thought process, Aguero told ESPN: “The invitation to be part of Argentina's staff was on the table.

“I spoke with Chiqui [Tapia, Argentina Football Association president] and I was clear with him about my goal to enjoy my time.

“I have a great relationship with everyone from the national team but I don't see myself in the coaching staff and with the players on a day-to-day basis. They are asking for a role that isn't for me right now.

“I had a talk with [Messi], he and Scaloni gave me an idea of what they wanted from me. I asked them for some time to think about it and then told Chiqui that I wasn't ready for that.

“I will be available for any event related to the Argentina national team, as an ambassador but I don't want a day-to-day responsibility with the team.”

Aguero could do without the stresses of coaching at a World Cup finals right now as he continues with his recovery from a serious health scare that forced him to hang up his boots shortly after leaving Manchester for Barcelona as a free agent.

He said of that process: “I still have to go to some check-ups but I already started with some training in the gym.

“Little by little I started jogging, but not a lot. I can play paddle tennis, golf.”

While Aguero will not be by the side of Messi and Co at the World Cup finals, Argentina are fancied by many to stake a serious claim for ultimate glory in Qatar – allowing their talismanic skipper to secure the one piece of major silverware that has so far eluded him in a remarkable career.